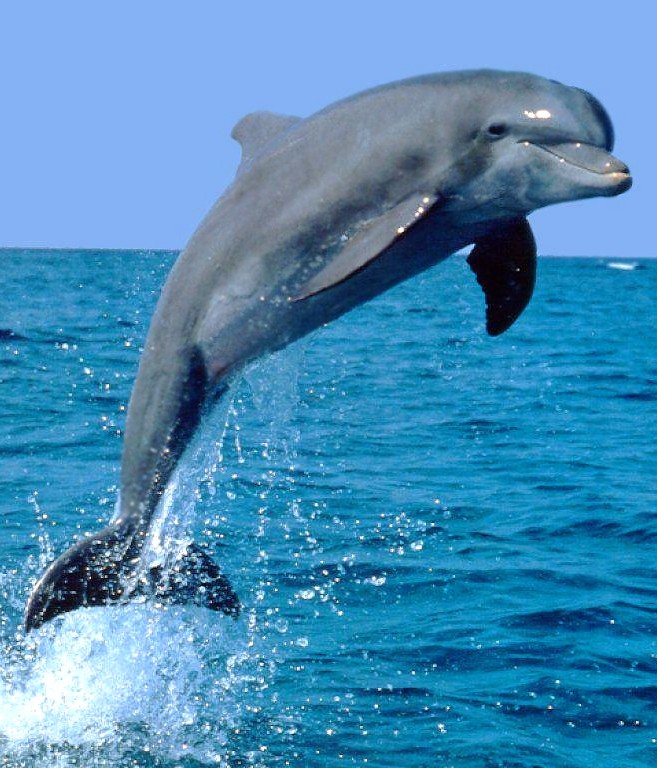 In Love with a Dolphin

Have you ever dreamt of something that seemed impossible and then it not only came true, but surpassed by far what you could imagine? Such was my love story with a wild Bottlenose dolphin. I was 25 years old and had moved to live in Scotland, at the Findhorn Foundation. As I walked one day along the wild sea, which moved me so deeply, I felt this strong dream arise to swim with a dolphin. I had not heard of people who had done it, nor was I sure where or if it was even possible. But I spoke a prayer out loud to the ocean and the sky: “If there is a way, let it be fulfilled.” I heard the wild geese honking as they travelled by.

It was not long after, when I overheard a guest, who told about a lonesome bottlenose dolphin (they usually are in groups) that was in Newcastle-Amble and that he was staying for an unusually long period of time. Immediately upon hearing the news, I dropped everything and ran to pack a few things into my duffel bag to take the journey by train along the coast. My heart seemed to beat at double speed. Could this actually be happening? I arrived at the harbor the same day. Dark clouds covered the sky; it was freezing cold and stormy. I did not care: nothing could stop me now, not even this grizzly weather. The old fisherman kindly brought me out into the sea in his little boat to an area where he had last seen the dolphin.

All I longed for was to meet him. Whatever it would take, I would do. And that meant to enter the ice-cold ocean in a bikini. Luckily, I am rather hot-blooded and had been swimming in the Atlantic during the winter every day. The fisherman, in his yellow (I oilskin and covered up with a thick beard to keep the cold away from his weather-beaten face, told me that he would pick me up sometime later and wished me good luck. Then he returned to the harbor.

I was left behind, alone in the freezing cold water of the sea, calling with my heart for this dolphin. I wasn’t sure if he would come, nor did I know about communicating with animals then, or why I was so nuts about swimming with a dolphin. When a powerful and true dream of the soul calls, you don’t ask questions–you just follow and live it. And that is what I did.
For a while, which seemed like an eternity in holding my breath, nothing happened, other than the relentless waves crashing into my face. I would not give up, not now that I was so close. I became very quiet, paddling just enough to keep afloat and waited in anticipation. Suddenly, I experienced an immense love welling up, and in that moment skin touched my skin. Soft, like silk. Belly to belly. A huge being touched me from below the waves. Shocked and shivering, I realized that he was here. Oh my God, he really had come. The dolphin was far bigger than I had imagined. He was laying completely still next to me, his body pressed against mine. Ever so slowly, I caressed his skin with my hands in utmost tenderness. He moved even closer in, and then he turned toward me. I could not believe it. Was I dreaming, or was this for real? It still brings tears to my eyes and makes me smile, as I am writing this:

He lifted slightly out of the water and looked into my eyes. He put his face and snout into my open hands. I was met with such pure love, it broke my heart open. I could only weep and laugh with joy. It was beyond what I have known. We looked into each other eyes for the longest time and communicated in ways that were of the highest intelligence and love. I just understood him: I do not know how. I was opened to the universal language of the heart of all beings. That was one of the many gifts he gave me, and it has never left me since.

After a while, he gently nudged me. I wasn’t sure what he wanted until I got it–play. Dolphins live and learn by play. And so we did, wild and free in utter delight. I was in bliss. I would hold unto his fin, and he pulled me through the water. Such fun it was, when he went under me and then shot out. I dove after him, but of course he was faster. We played hide and seek–he had the easy part for I could never disappear from him, and was always slower in my clumsy, human moves. He was so incredibly sensual; I admit he was the best lover I had ever met (sorry, gentlemen). His love pure, his joy infectious, we shared in ecstatic beauty. He showed me what it is like to be and dance in union.

Well, what can I say- I was in love. Fully, utterly and madly. With a dolphin. It was truly unfortunate that I couldn’t live with him in the water. I wished I could transform into a dolphin myself. Instead, I came every weekend over a period of six weeks and swam with him until my hands and feet turned blue. Some others heard of him and came to see, and a few were brave enough to venture into the ocean– of course with fins and wetsuits. I preferred to touch skin to skin, to be able to fully feel him. Only when I went back to the usual rainy shore did he let some other people come near. I must have been special to him: he certainly was for me.

When we were together, we danced in perfect love as one being. I don’t know how else to attempt to describe it. Here words end and the mystery–life itself–speaks. Only poetry can even come close to it. Or as the Sufis express: It is the moment when lover and beloved are one. The longing, when departed, seemed endless, only to lead into greater love when we joined again. It was as if he, too, was in love with me. The fisherman once said: “I don’t know what it is this with the two of you. I have never seen Freddie (so the folks in Amble named him) do that or be like that with anyone else around here. I wonder why he is he still here. Very unusual….” he would mutter in his heavy Scottish brogue.

One Sunday morning, I woke up in the nearby Bed and Breakfast and knew that this would be our last time to be together. He allowed me to put my arms around him and kiss him everywhere, while he nudged me affectionately. We both knew and deeply savored our last delicious and intimate touch. The old man picked me up. It was definitely the moment of our good-bye. I climbed on board and knew we would not meet again. My beloved dolphin did something highly unusual: he literally jumped across the boat, above my head. Three times. Back and forth. The fisherman was in awe and I was sobbing buckets. My precious friend was saying good-bye to me in his own way. I called out loudly: “I love you!” He is always and forever in my heart. He had shared with me the gift of true intelligence and pure love.A dream of my soul had come true
To this day, whether they are dolphins or whales, when I meet them there is an ancient bond we share, they come close and I am usually invited to be near with them. In my soul I am singing and dancing with them in love.

Here is some information about dolphins: It has become popular to swim with dolphins. Their presence is both healing and loving for many people. Please, never go after a dolphin. Let them come to you, if they want to. They are highly sensitive and intelligent creatures. They read you by your vibration, intent and energy. Do not chase them. They need their spaces for feeding and resting. Never touch a spinner dolphin. Their skin is so sensitive, that our touch alone can give them diseases, which they cannot fight off. Please remember- they are creatures of the wild, they are not objects to be used by us, but are alive and they need to be protected. Let them not be captured and imprisoned, for they suffer deeply in captivity. Please help to keep the beaches and oceans clean. Stop using plastic bags, which kills so many of these amazing ocean creatures. It is the least we can do. Celebrate, enjoy them, learn from them if you like. May their joy lift your spirit!

Where is love when you are in the pit?